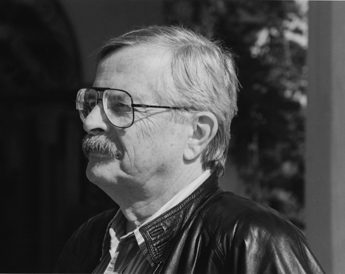 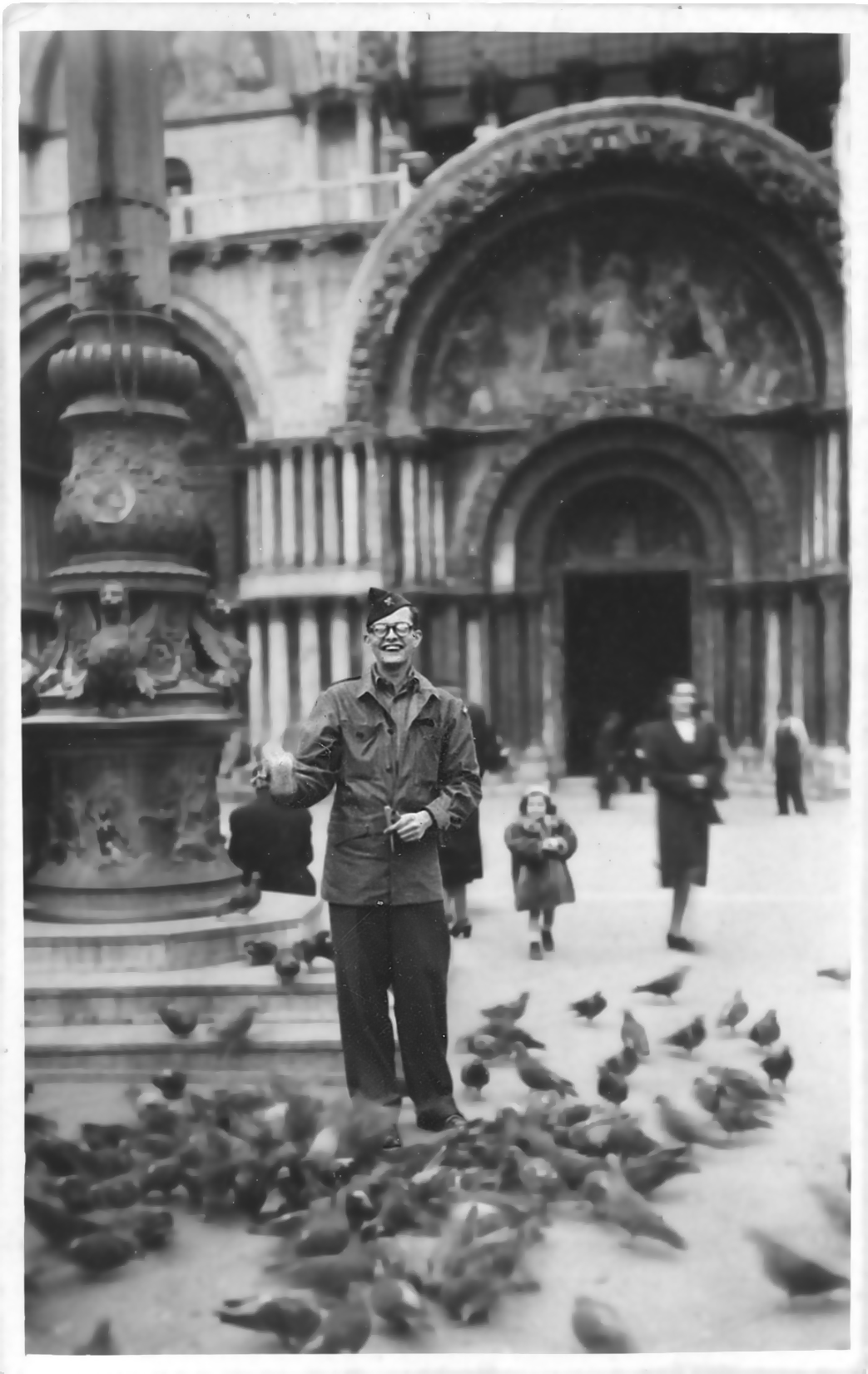 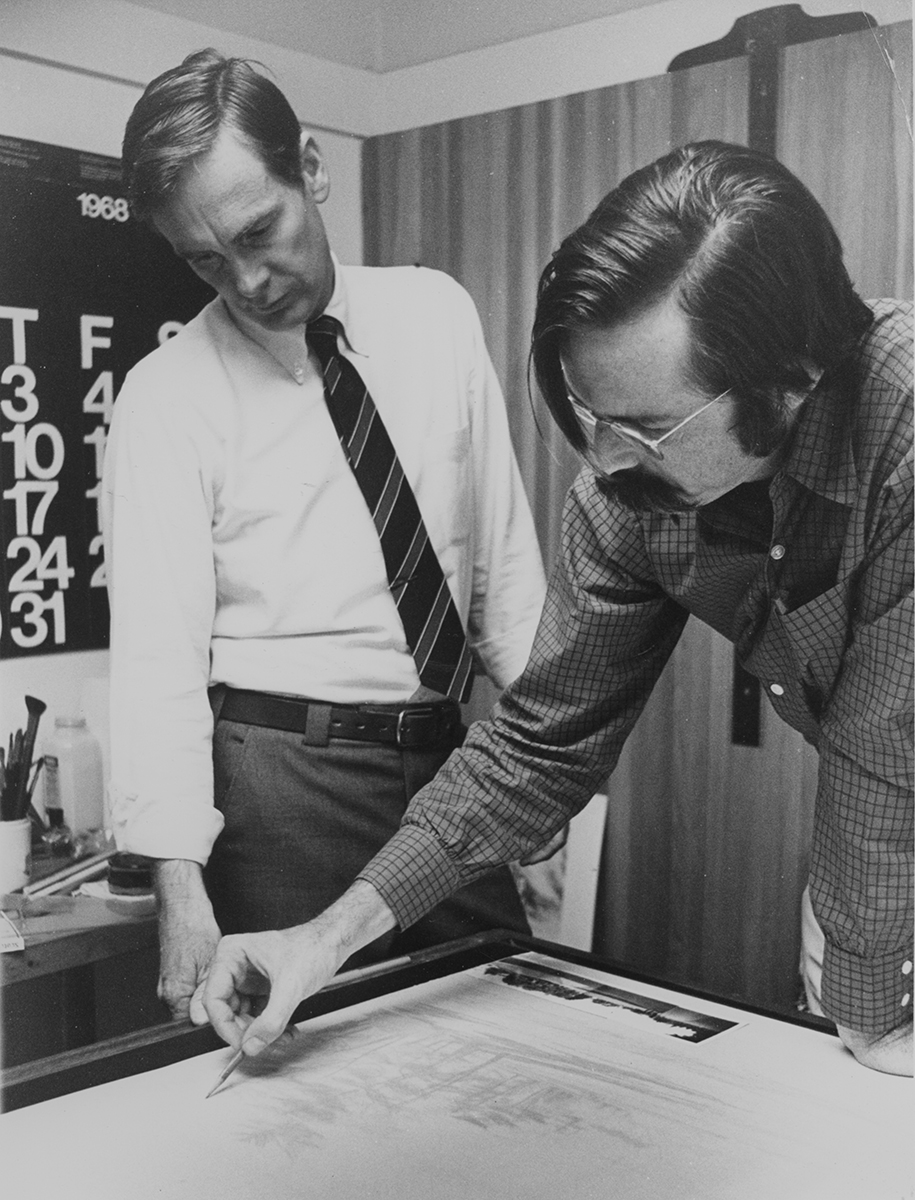 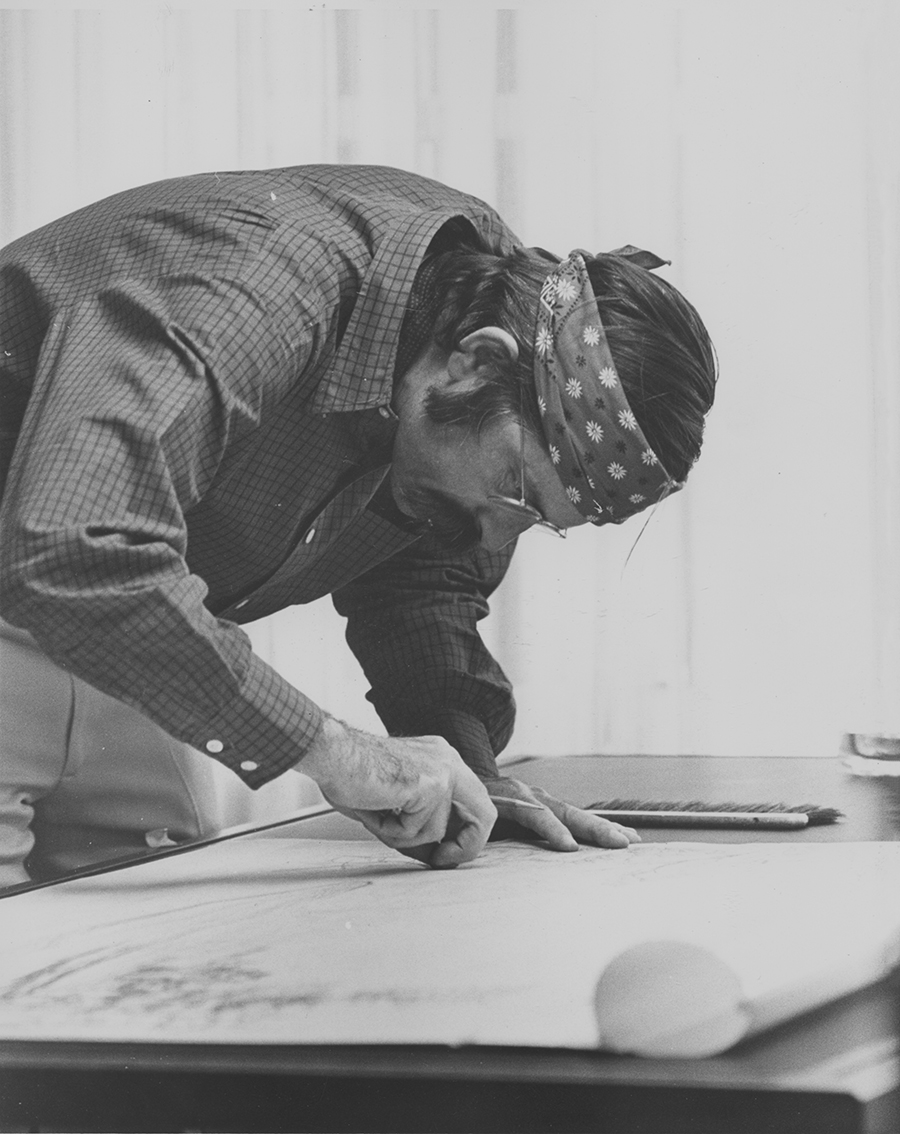 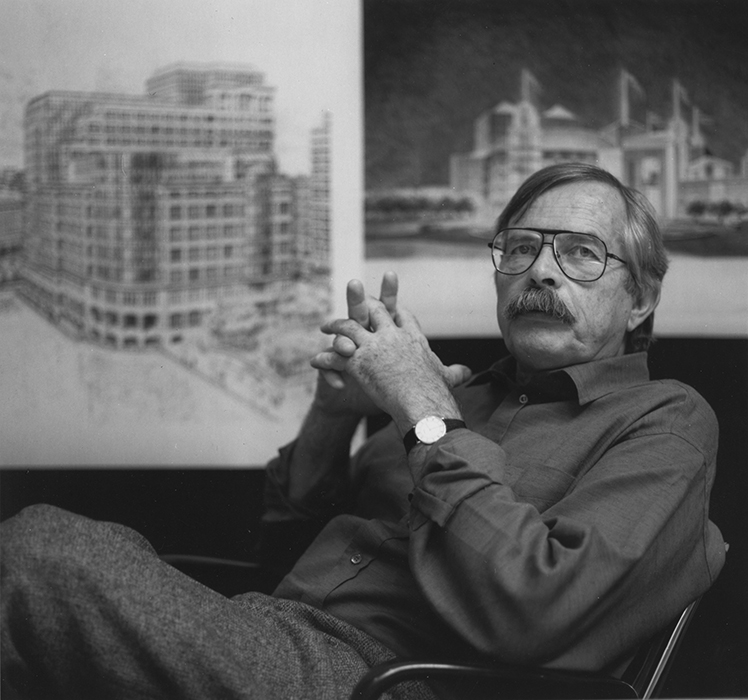 American Architectural Illustrator, Artists and Graphic Designer, Diniz is known for his work with many Pritzker, Gold Medal and pioneering architects of the 20th century. Diniz’s body of work encompasses many landmark and historic structures and developments the 1960’s through the 1980’s.

Carlos Diniz was the son of Alvaro Diniz of Recifi, Brazil and Elizabeth Merchant of Pennsylvania, USA. Alvaro Diniz was an Attache of the Brazilian Consulate. Diniz was born during a stop over in Phoenix, Arizona as the family was relocating to California. When Diniz was 4 years old, his parents separated and his mother moved Carlos and his younger sister Nina to Beverly Hills, CA.

In 1943, while a student at Beverly Hills High School, Diniz gained a local reputation for his expertise in constructing miniatures and models. His miniature guns, so perfectly scaled and complete that they could have fired, were the subject of a Los Angeles Times article and a short film by Paramount Studios.

Enlisting in the Army in 1946, Diniz was stationed in Italy. As he was later to write, “It didn’t take long for the architectural splendors of Venice to work their magic on me and I took to sketching them in earnest.”

Upon his discharge, Diniz enrolled at Art Center College of Design, with the intent of pursuing his other passion, automotive design, but a week long trip to Frank Lloyd Wright’s Taliesin Architecture School and the influence of an instructor that commissioned him to produce illustrations of a Case Study House to be published in Arts & Architecture led to another direction. Along with his studies at Art Center, Diniz set about a self-education in Architecture. He graduated Art Center in 1950 with a degree in Specialized Design but found himself employed at various Architectural offices.

Diniz was hired in 1952 at the newly formed office of Viennese architect Victor Gruen. While at Gruen, Diniz made contact with an international arena of developers and designers; many of whom were to become future clients and friends. Diniz credits his years at Gruen and the involvement in a large presentation project for the City of Fort Worth master-plan as setting the principal discipline in all his future work of providing for every aspect of a presentation.

In 1957 Diniz opened his own studio, Carlos Diniz Associates Visual Communications and modeled its structure after an Architectural office. The studio was to focus on architectural presentation in the fullest sense, producing everything from drawings and paintings, logos, presentations, brochures and marketing tools. The client roster quckly filled with well established and upcoming architects including Welton Becket, Minoru Yamasaki, SOM, Ladd & Kelsey and, naturally, Victor Gruen.

Always looking for innovative ways to depict his client’s work, Diniz enlisted the help of serigraph expert Art Krebs. Krebs, known locally for his movie poster work, most notably for Saul Bass, developed a technique for Diniz where the line work could be reversed out of the paper color. Diniz’s enthusiasm for this process had to do with the limitations on reproduction available at the time. Serigraphy provided and avenue to produce multiple strikingly bold and colorful prints for an affordable price. An example of this is the 1964 serigraph of Frank Gehry’s Danziger House. Gehry and Diniz met when they were both employed at Gruen and this early collaboration resulted in what has become an iconic image of 1960’s modern architecture. Another example is Diniz’s illustrations and subsequent serigraphs of Minoru Yamasaki’s Century Plaza Hotel.

Throughout the latter part of the 20th century, Southern California was rapidly growing into city sized planned residential neighborhoods. Carlos Diniz Associates was involved in the development of many of these expanding California communities including Laguna Niguel, City of Orange, Irvine, Westlake and Simi Valley.

Carlos Diniz Associates also became known for large scale “story-telling” illustrations. This was an important tool in the days before computer technology for developers to give viewers a feel for being in their unconstructed environment. He was also commissioned by Yamasaki to bring his vision of New York’s World Trade Center to the public. As Diniz wrote in his autobiographical book, Building Illusion, “…when I was invited to visit his studio in Birmingham, Michigan, “Yama” showed me a model so tall it pierced the ceiling of his studio and left me agog. How to make this project look right in scale with its surroundings was only one of the problems.

“Our initial work was to develop a series of black and white sketches that would ‘place’ the project in Lower Manhattan. This was a problem for us because of the height of the intended design as well as the confusing complex of existing buildings which surround the site. In those days, without a computer, you had to rely on your instincts as an artist using your sense of space and scale…”

To help the Port Authority developers fully envision this complex and super-scaled project, Diniz developed a series of “sketchbooks” that were submitted as the design developed. This practice led to the later development of brochures, booklets, posters and slide shows to present a developer or architects’ work in a fully comprehensive way.

In the late 60’s and through the 70’s Diniz worked with developers The Rouse Company and Architect Ben Thompson on several of the projects they had dubbed “Festival Marketplaces.” These forward thinking, broad-scale re-developments of historic buildings needed the sort of visual explanation and infusion of life that Diniz’s studio specialized in, and the results were very successful. In the renderings of these projects such Harborplace in Baltimore, Fanuiel Hall in Boston, South Street Seaport in New York and Union Station in Washington, DC, one can see Diniz’s ability to fully project the future of a development, evidenced by the fact that photographs of the built environments are virtually identical in content and feeling to his drawings.

Diniz became widely known for his personal genius in solving presentation problems in innovative ways, including inventing techniques or reviving lost ones. For the commission on the Pyramids at Las Vegas, Diniz had his drawings and information about the project printed on eight foot long scrolls that his staff painstakingly painted and gold leafed by hand. The design legacy and printed graphics that Diniz created for various projects was so respected that in 2002 he was posthumously awarded the Pacific Design Center Design Stars of Design Award.

Throughout his career, Diniz built a client base of the largest and most prolific firms of the era. Many of his professional relationships, such as that with SOM, spanned decades. Diniz also did several projects for the Walt Disney Company, including work on Epcott Center at Disney World, Orlando, Tokyo Disney and Disney’s California Adventure.

Diniz continued his work on larger and larger projects reaching around the globe. In 1984 he began work on a project that was to take him well into the next decade and involve the top urban development architecture firms and architects including SOM, Cesar Pelli, Norman Foster, Kohn Pederson Fox and Pei Cobb Freed; Canary Wharf, London. Canary Wharf was the perfect foil for Diniz’s grand vision. Renderings as large as 8′ wide depicted the new financial district in minute detail.

Concurrent with Canary Wharf, Diniz was commissioned to work on other projects in London, including the unfulfilled King’s Cross/St. Pancras proposal, County Hall, Broadgate, Ludgate and Vauxhall. He also worked on several projects in Japan, including the National Theater.

Japanese publisher Process Architecture Co., Ltd. approached Diniz to print a book of his work. Titled “Building Illusion”, the book is an all encompassing history of the vast work of the Diniz studio. Diniz collaborated with long time friend and associate, Graphic Designer and Author, Frederick Usher. Another friend and frequent client Architect Edward Charles Bassett wrote the forward.

In the introduction, by way of explaining the title, Usher wrote, “Finally, there are some projects reproduced which have not, and probably may never see realization. These, too, are part of “Building Illusion”. In fact the illustrations of projects modified or those that remain unrealized may perhaps be the most interesting of all the various projects presented because they may most clearly show the need for such work and its role in the design and development process…

“All of these architectural illustrations show projects prior to their realization; they are the “Building Illusions” of their protagonists, the planners, architects and developers.

“Once a project has been constructed it can be photographed, physically explored, touched and used. Then the prior illustrations are only useful as decorations hung on interior walls of the realized building. However, drawing architecture, the activity of Carlos Diniz Associates has become more-and-more a part of the ‘design process’.”

Carlos Diniz was considered an integral part of American architecture and architectural presentation by his many clients, associates and peers. In 1993 he was awarded an Honorary AIA as a symbol of this accomplishment.

By the early 90’s, a collapse in the commercial property market created a glut of office and commercial space, and large scale commercial master-planning, which had been the bread and butter of Carlos Diniz Associates, slowed down. To cope with this, and changing tastes in an industry enthralled with the innovations in computer aided drawing, Diniz downsized his office and gradually handed management over to his step-son, Ian Espinoza.

In 1996, subsequent to the death of his wife of 35 years, Colleen “Sundae” Diniz, Diniz retired and began working on a series of paintings of his beloved Venice.  He moved to Santa Barbara in 1998, where he continued to paint his Venice series until his death on July 18, 2001.